Is your boyfriend behaving a little different? Is he sending messages like he never used to? Does he shut his friends when they start teasing him while you are around? Maybe your boyfriend has leaked a few details out. Like, we tell our girlfriends every detail of the relationship, the guys do it too but by providing fewer details. Your boyfriend surely shares his side of the story of your relationship with his buddies. And some of the common things he tells his best friends regarding you are: 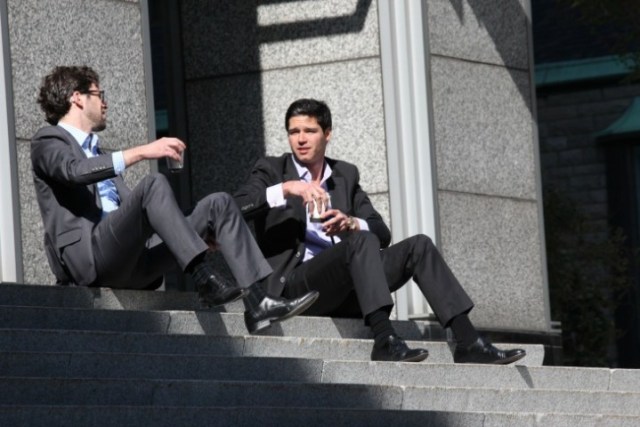 HOW EXPENSIVE YOU ARE TO HIM

Your boyfriend might smile his way to the cash counter but he surely is keeping an account of how much he spends on/ for you. And this accounts becomes one of the topics of your boyfriend’s group. They all sadly disclose the amounts that they spend on their girlfriends and have a nice time comparing the balance sheet. They discuss the amount the should keep aside for your birthday, anniversary, valentine day and any other occasion they might have to surprise you with a gift. So, ladies his friends know what you wear, where you eat and probably even your favorite store.

THEY KNOW YOUR FRIENDS TOO Your boyfriend might not be interested in any of your friends but he does care a lot of information regarding them to his friends. He remembers everything that your friends said or did and replicates it to his friends.They might occasionally make fun of her or praise her but she is going to be the topic of the discussion.

THEY KNOW ALL THE LIES

He must be a great guy but even great guys do lie to their girlfriends. And all the lies he tells you and manipulates the surroundings, he confesses it all to his friends. They most of the time support him with it and sometimes make him realize that he shouldn’t lie to you. Want to know his answers to any of your question, ask his friends and they will answer it for him. The guys have a great bond and so they share all the hard and true feelings with each other. Yes, your sex life doesn’t remain a secret to them, they might not know it all. But, they do know how good a kisser you are. He wouldn’t let out all the details and make you feel awkward on a counter. He limits the details to only his actions and might try showing off a little.

HOW SERIOUS HE IS ABOUT YOU

He might not want to tell you whether he thinks of a future with you or not, but his friends are aware of how he feels about you and where the relationship is going with you from his perspective. He might hide his true feelings and fears from you, but he can’t from his friends.

The fun and the magic of your relationship would be lost if he told you everything than his friends. Like you need to pour your story to your friends he needs to too occasionally. Don’t steal his space with his friends by being there with him 24×7. Give him the space he requires because if you don’t he will someday bring space between you two.