Men love sex, there’s no denying that. Why only men, women love sex too. But having sex for love or making love is different than just having sex for pleasure. In the initial stages of a relationship, you might not actually focus on it and just indulge in sex. It is also too easy for us women to become delusional and think that a mind-blowing sex or physical relationship is almost equal to romance. But you may have just assumed it. 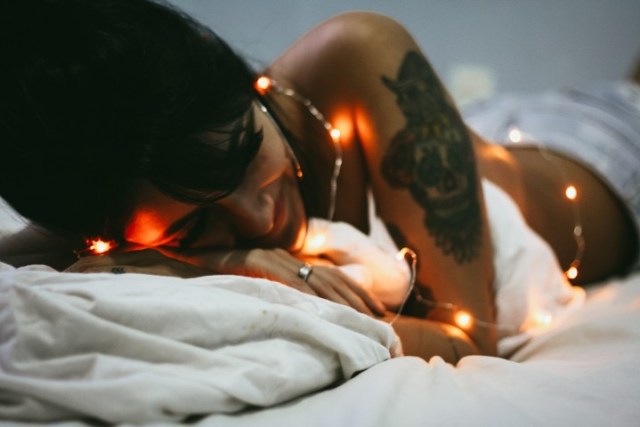 How He Shows His Love In Bed?

How to tell if it is actually love in bed? How to decode the body language of your man and find out whether he is into you or is it just sex for him? You may actually be scared to find this out. The signs may be highly confusing as well. But here are a few questions – the answers to which may be the signs and may help you to find that he actually loves you.


Does Your Man Look Into Your Eyes While Making Love?

Communication in the bed is important. While some people find it easy to speak it out in bed, some are just too shy. So in that case, one thing that can ensure the man’s love in bed is eye contact. He may not say it out loud but his eyes speak for him. If he loves you, adores you than the emotion will definitely be there in his eyes.

The smile he gives you while he stares at you or makes eye contact with you while having sex is pretty obvious that he cares about you enough. Men will generally avoid eye contact if they are not into a woman.

Does He Want To Please You In Bed?

Does your partner make an effort to actually fulfill your needs in bed?

He wants to please you in bed. He makes you see stars. Well, you know what we mean. A man will make it his priority to pleasure you when he loves you in bed. He’ll make sure you are satisfied. He would want to see you happy not just in bed but outside of the bed too. He would do little things for you which he wouldn’t have done for anyone else either.

He’ll make you orgasm or try hard to reach it, find your g-spot and pleasure you. He doesn’t ever jump direct to sex but indulges in foreplay. He makes you and your pleasure a priority even before his own.

Are smooches and kisses a usual during sex for you?

He takes his time with you. He kisses you while having sex not only on your lips but all over. Your feelings and your pleasure are a great deal for him. He showers you with kisses and shows his desire for you by showing that he is into every inch of you.

Does He Stay Behind After The Deed?

Isn’t it quite obvious? If it is just about sex, he won’t actually care about you. But if he does love you truly he’ll stay and take care of you after sex. If he helps you clean up, comes back to bed and snuggles with you, girl it’s the sign right here that he loves you in bed.

Does He Think Your Body Is Flawless, Even If There Are Flaws?

One of the actual signs of love would be when he admires your body more than you do. You may be insecure about your flaws but he would never point it out to you. He would still appreciate your body.

Does He Remembers The Most Minute Details About You?

At one point you may forget things about yourself, but he’ll never forget. He remembers each and every detail about you and your body. He knows what are your soft spots and your limits too.

What About Romance In Bed? There’s a reason why people differentiate between casual sex and lovemaking. A man makes love to you will always take his time to turn you on. He’ll indulge in foreplay, try to please you and make you comfortable before taking it further.

Is He Carefree And Emotional In Bed?

If the answer to these questions is yes then these are a few definite signs that say he loves you in bed. It is not just sex for him but making love.

What Does It Mean When A Man Cries While Making Love?

It is known that emotions run high during sex. Both men and women express their feelings after sex. But most men are known to feel the rush of emotions and they really want to unload these feelings.

He may sometimes not be able to hold all of it in and he may end up crying. It certainly doesn’t mean that he regrets it. But you have to be really careful and listen to what he actually says while having sex and when he is not having sex.

It is not unnatural for people to cry during sex, be it a man or a woman. You just have to find out what is the exact reason, which might be any of the following reasons

Now that you know he loves you in bed, how to know whether he is sexually satisfied with you? These are the signs of a thoroughly satisfied man.

He Can’t Keep His Hands Off You

It doesn’t just have to be about sex. He just likes to be touchy with you. He holds your hand when in public, finds a way to kiss you or just touch you. He may not initiate intimacy just for sex, but just to be affectionate with you.

He Cuddles With You

Cuddling is common for both of you. It is a fact that we all think that men just want sex, but the truth is even men won’t be fulfilled without a kiss, caress, and cuddle. He cuddles with you after having sex, even if both you don’t talk much after it.

Sex Is Regular And Isn’t An Issue In Your Relationship He doesn’t have to say it out loud to you because it should be pretty much clear to you when he initiates sex all the time. He is crazy about you and your sex life is pretty spontaneous. He is happy with what he is getting and it is legit clear that he is satisfied.

He Goes Down On You Often

Oral sex is regular for you both. He gives you oral and doesn’t mind it. It is obvious that he is getting more than what he wants and that’s why he doesn’t mind reciprocating oral sex.

He Has New Things And Tricks Up His Sleeves

Your sex life never gets boring. He is satisfied and in order to broaden the horizon and expand his skills, he’ll keep on experimenting with new skills and tricks with you. In fact, you are eager to explore and open to new things too. He loves it that you are so open about it with him.

He Flirts And Gets Romantic With You

When a man is satisfied he wants to make his lady happy as well. He would do little things and fulfill his and your sexual fantasies too. He not only flirts with you before sex but flirts and teases you even after sex.

He Verbally Compliments About Your Skills

He whispers sweet nothings in your ears while having sex and even after. Men normally don’t compliment their women just like that but if they do, it means he is sexually satisfied.