From an orphan to the princess bride, Arpita could not have asked for more in her life. Her life is like a fairy-tale. She was destined to be the loving daughter of the popular Khann family of Bollywood and the little sister of three amazing and warming brothers Salman Khan, Arbaz Kahn and Sohail Khan. Less is known, how she got to be the daughter of Salim Khan. Some reports say that she was adopted by Salim Khan and Salma Khan, first wife of Salim Khan. Other say that she was found crying on the streets when her mother passed away after giving birth to her and she was taken to the Khan home by Salim Khan’s second wife Helen. Well, whoever adopted her; it was Arpita’s good fortune that she was blessed with so much love. 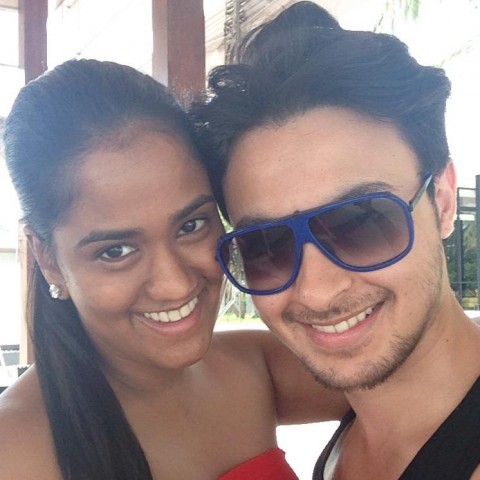 Arpita Khan is a fashion designer. She was educated at the London School of Fashion. Her boyfriend turned husband Aayush Sharma is the son of minister Anil Sharma and he owns a big family business. He hails from Delhi and is soon going to be testing his destiny in Bollywood too. Arpita and Aayush were so much in love with each other that they got each other’s name tattooed on arms. They dated each other for one year before they finally decided to marry after getting a green signal from their respective families.

Arpita married her boyfriend Aayush Sharma on 18th November. She rescheduled the date of her marriage to make it fall on the same date that happens to be the wedding anniversary of her parents. 18th November 2014 is the day when she tied her knots with long-time boyfriend Aayush Sharma and her parents celebrated 50 years of marriage. Khan’s are well-known for their lavish lifestyle and they left no stone unturned to make the wedding of Arpita a start studded grand ceremony that will be remembered forever.

The wedding ceremony started with mehndi, sangeet and haldi in Mumbai and the wedding took place at the Falaknuma palace, Hyderabad. The Khan family spend a crore per day for booking the palace. The couple got married according to Hindu Punjabi rituals. The ceremony ended with reception. Salman spent crores of rupees on the marriage and in addition to this; he showed his love through the expensive gift Rolls-Royce Phantom. Reports say that the also gifted a three bedroom flat to the couple near his own home.

The couple has moved to Mumbai and they are staying in a posh flat reportedly gifted to Arpita by Salman Khan. They have decided to stay in Mumbai so that Aayush can try his luck in Bollywood. Salim Khan has supported Aayush by saying that he owns a reputed business but when he’s so passionate about getting into Bollywood movies as an actor, he should give it a try and he can always join the family business later.

This wedding is one of the biggest events in Bollywood this year. The fairy tale bride Arpita found her soulmate in Aayush Sharma and was bestowed with lots of love, good-wishes and gifts from the loved ones. WISH ARPITA KHAN AND AAYUSH SHARMA LOTS OF HAPPINESS AHEAD!