No longer is this world safe for the gullible. At every step, there lies danger and misfortune. People these days are getting immune to the stigmatization of news which proclaims attack on women, mass attacks organized by groups etc. Nobody is affected or hurt when they hear of violence. In this deadlock situation, what best one can do is to protect herself. Probably that’s the only way out to survive in this tough place.

Enrolling in a defence class is one way to learn how to combat. Regular training will make the muscles stronger and hence ultimately prove the opponent to be weaker. Learning Judo, Karate, Boxing, or other forms of Martial arts like Taek Wondo are great solutions. They ensure confidence build up, help in concentration, and also does the extra benefit: it gives you your guardian angel. The strength to protect yourself!

So, here are certain dos and don’ts when you are in a dangerous situation:

While on road, try and keep your senses open. Notice the movement of any suspicious person who has been hovering around you. If you see him closing up on you, simply strike. Hit any blow you can, preferably on the nose, because it is a soft bone. You can crush the reproductive parts too. It completely impairs the attacker. If nothing else is possible, hit on his chin with open hands and push his head backward. That alone would suffice. The best thing is to not panic and look around. If you have keys in your hand, use them to punch. They can be fatal. Else if you are wearing heels, bang those into his eyes and you have him paralyzed. Hit him with a rubbish bin if that is lying around. Any object is useful if used with force, so keep your eyes open.

Scream. As loud as you can be. Keep shouting for details of what the attacker posseses and what harm he is going to do to you. This might get you help from someone, also, it might scare the attacker away. Use aggression. When being attacked, become ferociously wild. Bite, scratch, pinch, blow, hit, do anything that suits the situation, give him a hard time and run as fast as you can. Take shelter in the nearby local police station, or halt at a restaurant.

Generally, distracting the vision is the best thing you can do to save yourself. Strike the eyes with your fist or even use sharp objects to hurt him and poke his eyes. That alone would suffice, maim him, and injure him badly. 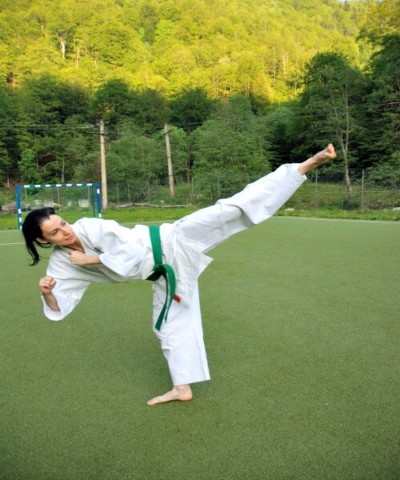 This is the region if punched, can easily maim your attacker for hours. Hit, kick, punch hard, do what you can, and your attacker is thrown. Use maximum force, that’s the key point here.

Hit the throat and neck:

This region is the airway, and if you wish to hit and block his respiratory system, there is nothing like it! Simply strike, and he will be maimed.

Lastly, believe in yourself, and keep firm. Never falter when an attack happens, because it’s important to master your own nerves. Only you can save yourself from misery.

Fighting For Your Dream Will Help Everyone