Have you tried all the tricks in the book and still can’t seem to get his attention? Or maybe you did get his attention but it’s not enough to make him fall in love with you. Well, strange things happen to those who fall in love with an Aquarian man. But then again, when was normal ever worth the effort? If you have fallen in love with an Aquarian man, pat yourself on the back, for you have an eye for uniqueness. You’ll need this pat because to have him reciprocate your attraction will recover effort that might leave you in an exhausted state. But know, that if you play this right, you might just have caught the big fish in the sea. Ready to take on this man from another planet? How is an Aquarius Man Personality?

An Aquarian man is a mystery that likes solving mysteries. His curiosity rivals that of a child and this is what you need to use to your advantage. This is a man who has strange ways of showing his love. So, if you are looking for a perfect love story where the man of your dreams falls in love with you and decides to get married, this is not the man for you. However, rather than trying to derive your life from fairy tales, you can write a new one with this man. A fairy tale where the fair maiden had to wait for years to get married to the knight in shining armor.

Why? Because marriage was not the conquest he was willing to sacrifice his life for. There’s so much love in this man that he wants to share with the world. So much so, that he wouldn’t easily commit to one woman just because that will hold him back from sharing his love equally with the rest of the world. If there’s one thing that can be said about him, it’s that he’ll never let life get boring for you. You might not be going out on adventures, but the sheer experience of being with this man is a quest of a lifetime.

It takes one really patient and dedicated woman to make an Aquarian fall in love and then admit it too. Ready for this race between the tortoise and the rabbit? You did bet on the slow one, but he does win the race.

How to Make the Perfect First Impression?

The first challenge to making the perfect first impression on your Aquarian crush is arranging a one-on-one interaction. No matter where you meet him, he’ll always be surrounded by people. if you don’t stand out, he won’t be interested. So, you either stay on the lookout to find him when he’s alone or do something to stand out and peak his curiosity. If you appeal to his curiosity, that’s the first battle won.

Aquarians are men of habit. If they form their mind about something they stick to it and judge others by the same standard. Thus, the first quality that you will have to display is that you have an ethical code that you stick by. He will be impressed by this similarity in character, even if he disagrees with your principles.

He might seem like a liberal on face value, but he is prudish at heart. So, choose something conservative to wear when trying to impress him. He will not be attracted to the amount of skin that you show. Wear something that stands out. Change is his favorite phenomenon. So, when he’s bored of seeing the same thing all over, you need to be the breath of fresh air.

What does an Aquarian Man Dislike in a Woman? There’s not a lot that an Aquarian man dislikes about people. After all, he is a man who would even refer to his enemy, as a friend. But if you are trying to make him interested in you, keep these things in mind. He doesn’t like women that are clingy and needy. Responsibility, of any form, when forced on an Aquarius man will make him shake. He reveres independence and independent people. So, naturally, someone who makes him responsible for her emotional drama will not attract his fancy.

Appealing to his curiosity is quintessential. He wouldn’t be attracted to a woman who is an open book or doesn’t present a challenge. Know the difference between asserting yourself and aggression. If there’s one quality he absolutely hates, it’s aggression. He likes positive influence and therefore, would never stand with someone who resorts to negativity just to get their way.

Never deny him his freedom or put him in a spot he would much rather avoid. He will hate you if you force him to do or say things he doesn’t want to. That too is a form of aggression in his opinion.

How to Get an Aquarius Man to Chase You?

The Aquarius men seldom value that what comes easily to them. So, don’t try too hard to get him to like you. This will only make him less interested in what you have to offer. If you want him interested, show him sides of you that not everyone gets to see. The sheer surprise will have him hooked.

You will also have to play hard to get. Nothing that isn’t a challenge will get his fancy. It’s like telling a child not to do something only to have him to that. But while you do all this, don’t forget to be his friend. That is the foundation of a romantic relationship with an Aquarius man. He will never fall for a complete stranger.

Be cool. He loves people who don’t take themselves or trivial matters seriously. The more you fret over things the more toxic he’ll believe you to be.

If he’s ready to have sex with you then there is no doubt that he’s falling in love with you. But like all other things, the Aquarius man has a queer list of things he likes in bed. He is a curious man, so, it’s only natural that he likes to experiment in bed. They hate traditional lovemaking and so, you need to be ready to do it anytime, anywhere, anyway, because sometimes even the bedroom becomes boring for him.

It won’t always be easy to maintain a sexual relationship with him. Often you will feel like he’s more into the experiment than actual lovemaking. His curiosity gets the best of him, and yes, he might not be as fast as falling in love as you like. But once you have him, he plays for keeps. If he’s not in a committed relationship with you, he might have multiple sex partners.

He likes to explore your body and not just new ways. He likes surprises in his sexual life. So, don’t be shocked if he asks you if you are in for something he read in 50 Shades of Grey.

How to Make an Aquarius Man Fall in Love with You? 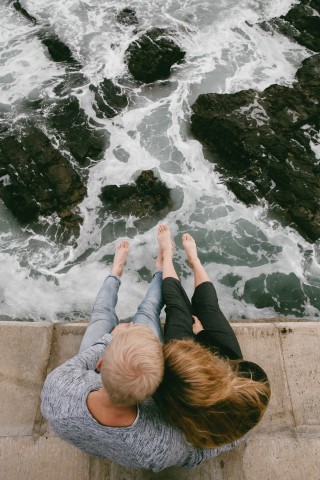 If you were playing for the long haul, here are a few things to help you achieve your goal. Creativity is something rarely found in most humans. Naturally, an Aquarius man will fall for a creative woman who can bring freshness to his life. This ranges from cooking new food to surprising date plans.

The reason he is taking so long is that he cherishes his freedom. Be sure that you give him his freedom and he will give you yours. Appreciate that his life has a part which doesn’t involve you and he can better manage both if they stay separate. Being with you should be an adventure. Surprise him as often as you can. The world seems very mundane to the Aquarius man and he gets attracted to new things like bees to honey.

Be confident about yourself. He would love to be your support but wants you to need him as little as possible. So, if try and deal with your stuff by yourself. You don’t have to be stupid to make him fall in love with you. An Aquarius man will always appreciate a clever and smart woman.