You walked into a room full of people and there he was with every eye in the room on him. Maybe he became brighter as the presence of a Leo in the room challenged him. But either way, this energy that was surging through him could not be resisted. Maybe you met him a couple times more and realized there was no man who could come close to this supermen-like specimen. Well, an Aries male can be called by that name, because he doesn’t fall short of the charisma. But you aren’t the first one who has shown interest in him. He’s used to all that. He’s looking for more and the competition is tough. Want to know the secret to make this dynamo yours? Keep reading this blog by an Aries female on how to attract an Aries man!! Let’s get one thing straight. When dealing with an Aries, think like you would deal when dealing with a toddler. There’s an energy in him. A spark, a curiosity. That will keep you hooked and suck you in. There’s a fire to an Aries that is fuelled by their passion. This contagious passion will bring out the best in you and make everything you ever wanted from a relationship.

But when you play with fire, you risk getting your fingers burnt. There will also be intolerance, selfishness, and thoughtlessness, that all add up to what it means to be in love with an Aries. They can be the best at their best and the worst at their worst. Things move so fast with this zodiac that many slow pokes get left behind before they even begin. Still in for the game? Here’s how you can consume this fire and make him your own.

How to Make the Perfect First Impression?

I wasn’t kidding when I said the competition will be tough. Very rarely have I seen an Aries who doesn’t like to flirt or has many admirers. But fear not, for I am here to guide you through the opposite gender of my zodiac. Do some background research on him before making your move. See how kids like it when you do what they love? Well, I did warn you he will be like a toddler. The more you know about him, the better. But don’t go all stalker-ish on him. He can’t cope with that.

Talk to him, about him. Like I said don’t be a stalker. Leave a few things about him to ask him when you meet. Ask follow-ups and he’ll be jumping with excitement at the attention. He doesn’t care much about comfort because comfort to him is looking you best. So, make sure you look smokin’ hot. Wear your best when you are going in for the kill. He likes to show-off shiny objects.

Your Aries crush doesn’t lack for confidence. He will sympathize with your shy nature, but won’t fall for it. Be confident. Make the first move, start the conversation. His energy will be attracted to your energy. And flirt. Let your intentions be known. But in a manner subtle enough to make him come back to you to confirm if his interpretation was right. He’ll be interested in a woman whose interest in him is a mystery.

How to Text an Aries Man? If you don’t have his number at the first meeting, don’t worry. You’ll get it on the second go. When you do, make sure you send the right kind of texts to keep him hooked. For starters, send witty remarks. Chances are that’ll he’ll have the choicest quips on everything. You need to keep up with that. Don’t let the conversation get boring. He runs away from boring.

Talk about your passions. He does like talking about himself. But he won’t be attracted to someone who doesn’t have goals of their own. So, talk about your dreams and what fuels them. Again, flirt. Not only does this convey your intentions, but it also makes him feel special. They don’t admit it, but Aries depend a lot on what others think of them. Flirting is his way of knowing his value in your life.

Don’t let your research on his end. Ask him questions and show interest in his life. If you like the same things as him, it gives you extra points. Be natural. They might not be quick to spot pretense but it shows eventually. If there’s one thing they can’t stand, it’s façade. Don’t overdo or overthink when texting with an Aries.

How to Get an Aries Man to Chase You?

If you think that just because he knows you like him, he’s going to skip the chase? Aries love the chase more than any other zodiac sign. So, how do you get him to work for this relationship? Start by being a challenge. He doesn’t like things that come to him easy. Just like kids would do anything they can to do what fascinates them, so should he.

Don’t lay it all out at once. You have to keep his curiosity. You have to keep him intrigued. Be a mystery that he would like to solve. He wouldn’t wait till after you are official to kiss you. If you aren’t a good kisser, practice!! Your first kiss needs to be unforgettable. But make sure you don’t give in to temptation.

Make him wait. Let him earn everything. Hint at a physical interaction but don’t go through with it. Playing hard to get definitely works with this man. Also, don’t be available to him all the time. Don’t respond immediately to his texts or miss his calls. He’ll take you for granted if he knows you are available all the time.

How to Attract an Aries Man Sexually?

An Aries man will get in bed with whoever is ready when he is single. But if you want this to translate it into something long term, you need to play your cards well. He wants to dominate but will love if you compete for dominance. You can do the best in the 69 positions. This way he gets back what he gives. Keep him interested by not engaging in routine sex.

Sex needs to be rare enough to make it special. If it becomes regular then he will get bored. But don’t make it so rare that he starts looking for it elsewhere. He likes aggressive sex. Aries get very passionate in bed and for them going slow does not cut it. The wilder it gets the better it is for him.

Seduce him with sexy lingerie. You will have to invest some bucks in this too. He likes everything about sex to be amazing. This fantasy includes the sexiest lingerie too. He doesn’t pay much attention to the set-up. So, if there’s one thing you don’t have to worry about with him, its how the room should look like.

How to Get an Aries Man to Fall in Love with You? 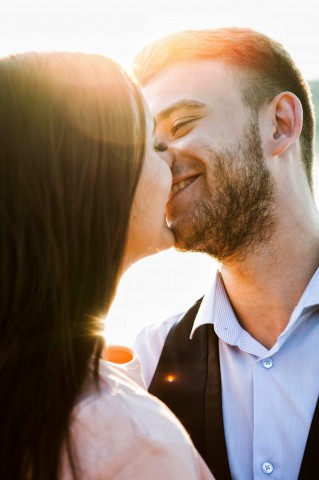 When the chase is over and you have safely secured his attention, it’s time to play for the long haul. In order to fall in love, the Aries man is interested just in the character of his partner. Be hardworking and determined. As passionate as he is about his life and goal, he expects the same from you. Aries man will not settle with someone whose goal is to do nothing. Strength and dignity always win his heart. An Aries man will never shy from standing up for those he loves. But to make him fall in love with you, you need to have the strength to stand up for yourself.

That doesn’t mean he doesn’t want to be your knight in shining armor. Make him feel relevant to you. That is, be a little vulnerable around him at times so that he feels like you need him emotionally. He might look like someone who likes everything flashy, but modesty is very dear to him. It’s not so much about what you can do for him but what you are as a person that attracts an Aries man to a woman.

And allow him to be a traditional romantic. While he wouldn’t mind switching roles with you, he would prefer that he does all the things that a man is supposed to do. You see, kids are wired a certain way. Give him his independence. You have to trust him because trying to put a leash on him is only going to make him wilder.