GULABI GANG – THE GANG FOR JUSTICE OF WOMEN

The “Gulabi Gang” founded and lead by Sampatpal Devi is an extraordinary movement of women formed in the year 2006. This group of women got its name Gulabi or Pink Gang because all members of the group wear pink saris. Another significant thing about Gulabi Gang is the bamboo stick wielded by the members. 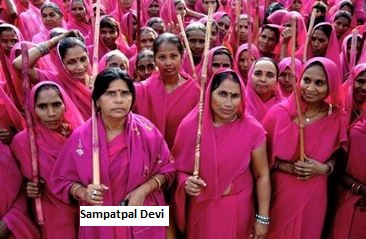 Sampatpal Devi was born in Banda district, Uttar Pradesh, India in the year 1958. Born to a poor shepherd, she tended goats and cattle. She always yearned to go to school like her brothers and taught herself a little taking their help. When her uncle noticed her enthusiasm for education, he got her enrolled in a school. However, only at a tender age of twelve when she had just completed fourth standard, she was married to an ice-cream vendor. She became a mother at the age of fifteen and in the next few years she gave birth to four more children. To become a social crusader, she resigned from her government job as a health worker.
History behind Gulabi Gang The birth place of Sampatpal Devi (Banda District) is one of the poorest districts in India. Patriarchal culture, child marriages, dowry, female illiteracy, domestic violence, child labour and rigid caste divisions are prevalent in this region. One day, Sampatpal Devi found a man beating his wife mercilessly. She requested him not to do so but the man abused her.

Sampatpal Devi took five other women of the village with her the next day and thrashed the man with bamboo sticks. The news spread rapidly and women from various places started visiting Sampatpal Devi for similar interventions. Many women wished to join Sampatpal Devi in this movement so she went ahead to form Gulabi Gang in the year 2006. To give uniformity to the group, she chose pink (Gulabi) colour saris for the members and named it as Gulabi Gang.

Gulabi Gang as a Gang of Justice

Gulabi Gang initially aims at punishing oppressive men and fighting domestic violence and desertion. The male offenders are accosted and the group first tries to solve the problem through counselling and advice to both the parties but the offenders who refuse to listen or relent are shamed publicly. If the men use force, the women members thrash them with bamboo sticks. At present Gulabi Gang has thousands of women members. Gulabi Gang also has male supporters. Today, Gulabi gang not only work for women rights but also for several other social issues such as proper distribution of food-grains for those who live below poverty line, disbursement of pension to widows, child-abuse, child labour and much more. The Gulabi Gang adopts the simple method of confrontation and direct action to
bring positive changes in the system.

o For the States of Uttar Pradesh, Uttarakhand and Delhi, for the Social Bravery category.

o This award is an initiative of The Indian Television Academy that gives honour and recognition to Women Achievers.

Today Gulabi Gang stands as a symbol of womanhood, empowering poor, illiterate women as well as those women who in-spite of being well taught and belonging to good families have always been underestimated by the male members of the family and society. Gulabi  Gang has set an example for all women to combat malpractices and injustice prevailing around them to deprive them of their basic rights and respect.