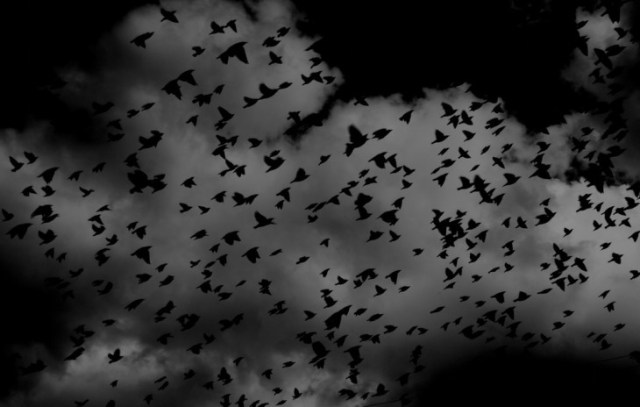 Vicky opened the door of the haunted room 1504. A gush of cool air which had been locked up in the apartment along with the six suicidal spirits welcomed them. They entered the room and turned on the lights. The room was in a complete mess with dust, rats and cobwebs all over the place. The door behind them closed with a thud. Ronit unbelieving himself said, “relax guys, it’s an automatic door. Let’s set up our instruments and get started. We have time only till morning. Can’t waste it fearing these webs.” Agreeing, they set up the gadgets in the appropriate places. The lights flickered and abruptly went off. Rahul called out from the bedroom, “what’s wrong? I’m in the middle of something very important. Stop fooling around Ronit and switch on the light.” He didn’t hear the voice of Ronit shouting back but what he did hear was the whispering in his ear of a man, “Nothing is wrong more than you.” And then the giggle of a girl followed.

Frightened, he stood up and ran back toward the others to report the incident. But how could he reach  them when a bottle appeared in his way out of nowhere making him trip and fall. The temperature of the room had fallen very low and all of them shivered. Gaining consciousness, Rahul somehow managed to get to his feet and sprinted toward the other two. What he saw made him sweat. Vicky had lost control on his mind and was boxing Ronit trying to pin him down. Ronit was struggling, gasping for air and using all his might to save himself. When Rahul tried to step ahead and free them, a woman stood in his way. She had no hair on her had and no hands. Her eyes were bloodshot and lips turned into a mischievous grin. She told him in a husky tone, “you knew everything yet you came. Now, suffer!” There was chaos all over the place. Rahul felt frightened. He had never seen such a woman in his lifetime. What shocked him more was the woman’s transformation into a thin layer of mist. He heard running footsteps of a dozen people behind him. He didn’t glance back because he wanted to save the life of his best friends. He launched himself into Vicky to loosen his grip on Ronit. Vicky flew into a nearby table, it’s glass digging into Vicky’s skin. Considering the more urgent matter, he called out for Ronit, shaking him, “Ronit are you okay? Can you hear me? Ronit? Answer me. Please!”

Dead bodies never answered. Rahul checked for his pulse and his heartbeat. There was none and his body was sickly cold. Saying a silent prayer, he moved the palm of his hand over Ronit’s face, closing his friend’s eyes.

Vicky had by now regained his composure. In a ghastly voice he said, “how dare you come here? You wanted to make a show on us. You wanted to use us as entertainment. I’m gonna kill all of you. No one will be left alive.” He marched into Rahul throwing him into a heap of dust.

Rahul blinked several times before opening his eyes. The hard floor under him felt as cold as ice. He was lying on his stomach and when he opened his eyes, he saw seven faces looking into his eyes. Six were of the dead and the long lost people he barely knew. One of them was Ronit.

Rahul cried and shouted for help, “someone please help me! I don’t want to die!! God!! Save me! Pleaseeee!!”  He ran towards the door and  tried to unlock it. He tried so hard that the door knob came in his hand. He desperately wished he knew that there was no turning back.

Behind him stood Vicky with a vicious piece of glass in his hand, ready to kill Rahul and devour his soul. Rahul felt a gush of adrenaline through his blood. He wanted to live. He threw himself at Vicky thrusting him on a wall. A nail on which once a framed hanged, now holded Vicky. It had entered Vicky’s back and emerged from his chest. Vicky screamed in pain and agony. His chest bled and he gained back his consciousness. He apologized to Rahul, “I’m so sorry Rahul for making you come here. You were right, we should have never thought of it. I hope you live..” Saying these words, Vicky breathed his last.

Rahul felt his head throb with pain. He sat down against a wall with his head in his hands. The loss of his two friends was beyond comprehension. Two deaths in a row followed by the evil events made him want to die. Rather he knew he would live till the break of dawn when the crew would break open the door and come to their rescue. Would it be too late by them? He did not know. He considered the ‘ifs and whethers’ of every thing. If he had persuaded his friends a little more. If he had not pushed Vicky.. if he had come during morning… If…and he fell into a deep sleep.

When the sun rose, the crew from Frames Pvt Ltd came to help the victims of the previous night. They knocked twice at the door and hearing no response, broke open the door. Rahul awoke instantly by the sound and hurried towards Mr Rao. He sobbed bitterly and in intermittent tears, said, “Mr Rao, I beg of you, take me home.. take me out of this place. They have killed my friends.” The reaction from Mr Rao was null. Rahul was puzzled by this behaviour. They should have called an ambulance and taken him to the hospital. He thought to himself, “maybe I don’t look so injured.”

He walked with them back to the place where all the action took place only to find out his dead body among the corpses of his two friends. He was now a spirit, a soul which was invisible, mysterious and free.