Splitting the words into two where ‘KAMA’ stands for pleasure, and ‘SUTRA’ as a guide, handbook or story, Vatsyayana Mallanga, a North Indian Scholar of the 3rd Century in his book “KAMASUTRA” essentially hints on the spiritual art of love or rather the treatise of pleasure. On a literal level, the KAMASUTRA is a vintage adviser to lovemaking, meditating on thethe social and sexual heritage that has been carried on since time immemorial. KAMASUTRA is much more than a mere manual of vigorous sexual positions for its historical significance lies in the fine art of living, about looking for a spouse, preserving the social institution like marriage, and laying down the various postures in sexual intercourse. This present article on” KAMASUTRA” deals entirely on marriage and even if we ignore definite magical prospects there is much to be said for paying some concentration to the features that the KAMASUTRA represents and foregrounds the reflection of being a preferable wife for her future husband.

According to the Hindu philosophy, the fusion of Dharma and Artha are manifested only when a girl of the same caste and a virgin gets engaged into a matrimonial bond in accordance to the percepts of the Holy Writ. These acquisition of Dharma and Artha is not only the stepping stone when it comes to a union of a boy and a girl. Rather it also depicts progeny, harmony, increase of friends and pristine love in the overall concluding basis.

WHAT ARE THE QUALITIES REQUIRED TO BE POSSESSED BY THE GIRL BEFORE LANDING UP INTO MARRIAGE? 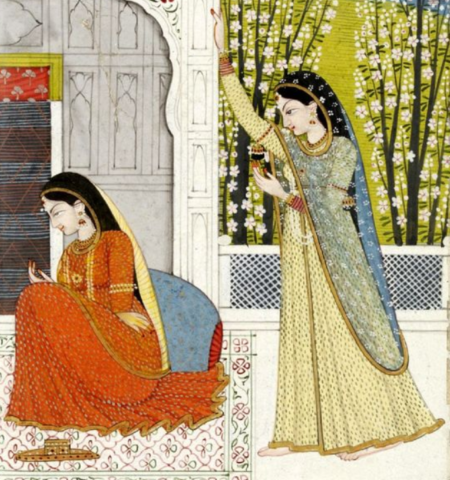 . A man should stabilize his strong fondness and devotion upon a girl who is of a pleasant family, whose mother & father are alive, and who is around three years or younger than himself.

. The girl should be extremely beautiful not only face, but at the same time also possess sharp physical features when it comes to her hair, nose, eyes, teeth, ears and breasts.

. She must hail from a highly reputed family, rich in background so much so that there should prevail a strengthened relationship in her family within her relatives and friends.

. Most importantly, the girl must have a lucky mark on her body so that she can act as a good luck charm for her future husband devoid of any sickness instilled within her.

. The girl must be pure in her own way. This means that she shouldn’t be touched by any other person before meeting him. If somehow she looses her virginity before marriage, then that girl is forever abandoned to be considered as marriageable.

HOW TO BRING IN THE MARRIAGE BETWEEN THE BOY AND THE GIRL? To move ahead with the marriage proposal, the first approach must be initiated from the boy’s side. To generate a marriage with this virgin girl, the KAMASUTRA stimulates all manner of trickery, diversions and twists. For example, the friends or rather say the boon companion of both the boy and the girl should praise enthusiastically the prospective bride or groom to the additional party’s family, “even to exaggeration of all the excellences,” in order to be more appreciating and impressive in front of the girl’s parents. One of the friends from the potential groom’s side should pretend and dress himself as an astrologer and eventually declare the future fortune and wealth of the couple should they get married. On the other hand, in order to arouse certain form of enviousness on the girl’s mother the male friends would make up stories of other girls by comparing them with her daughter and speak in support of the other girls by mentioning traits such as being better, or beautiful and possessing more unique qualities. A girl should be considered as a marriage material and granted as a future wife also when the wealth, fortuity, gesture,prediction and the words of others are appreciative and pleasing.

Vatsyayana in his book KAMASUTRA, has well illustrated the necessary criterions to be possessed by the girl in order to be considered as a promising tool for marriage. It must be noted that it’s not simply about a girl’s grooming by all means to be presented perfectly in front of her future husband and in-laws. For when it comes to a man he too is kept under certain rules and regulations which needs to be followed. He is strictly warned and prohibited from marrying the kinds of girls listed below and it is eventually seen as inconsiderable even though at one point he might like her.

. A girl who is seen as as sleeping, crying or gone out of the house when sought in marriage.

. A girl who has an ill sounding name.

. A girl who is kept as either hidden or secret.

. A girl whose nose looks sunken.

. A girl who doesn’t acquire the preferable feminine qualities.

. A girl who has distorted thighs.

. A girl who does not like to stay pure.

. A girl who has lost her chastity.

. A girl who has a projecting forehead.

. A girl who has an uncovered head.

. A girl who has her nostril whirled up.

.  A girl who is deformed in any way.

. A girl who herself is a younger sister.

. A girl who is a Varshakari (someone who is prone to utmost perspiration)

. A girl who is addressed by the name of one of the twenty-seven stars.

. A girl whose name sounds more or less like a tree or a river.

According to some authors prosperity and well being is obtained only by marrying that girl to whom one gets emotionally linked, and therefore no other girl but the one who is loved and bestowed with warmth and fondness should be wedded by anybody.

WHAT HAPPENS WHEN THE GIRL BECOMES MARRIAGEABLE? As readers by now you have already been acquainted with the knowledge that Vatsyayana’s KAMASUTRA speaks not just about the aftermath of sexuality post marriage, but at the same time also follows certain rules and regulations in accordance to the Hindu philosophy by adopting traditions and sharing concepts essential for its conviction.

. Once the girl becomes marriageable, her parents must dress her in a manner so that she looks smart and remains in the limelight.

. Since marriage is all about societal involvement and there’s nothing to hide once the groom’s family approves with a ‘yes’, dressing the girl up beautifully every afternoon becomes an ongoing routine.

. It is at this hour, when the would be bride mingles with her female companions and engages into sports, sacrifices and marriage rites and thus exhibit her as a favored position in society, because she is a kind of merchandise.

. Moreover, there should also prevail certain kinds of an exchange of sweet talks among the family members because its not just the union of the two souls but also of the two families respectively.

. Hence, an extra effort of gratitude needs to be showered so that all the rituals, ceremonies involved during marriage doesn’t act as a hindrance by making a great gossip behind the back resulting into a lower prestige of the girl’s family in front of the society.

THE MEANING OF ‘CONNECTION’ IN THE PROPER SENSE OF THE WORD

In KAMASUTRA’S language, a connection or rather a union between a man and a girl takes place not in terms of being superior or inferior to one another, but rather when the reciprocal of likeness is mutual from both the sides. Interestingly, the primary sign of this feeling of admiration isn’t built only on bodily pleasure but from the edge of respect and trust. It is through the blend of dignity and certainty that ‘connection’ is being defined in the true sense of the word. Hence a man should arrange neither a greater connection by which he is forced to bend down later on to his relative nor a lowered connection, which is comprehensively disapproved or criticized by all.

Vatsyayana is gathering tales and perceptions from various sources and shedding an interpretation by portraying a sketch of the possible traits a wife must acquire within herself, for KAMASUTRA claims that nothing can be attained without a mindful negotiation.

5 Lies you have told yourself to avoid a terrible breakup

7 Habits of yours that are instantly killing his interest

What a Scorpio Man Likes in a Woman?