No one loves the way a Libra man does! Can you expect any less from the man whose ruling planet is Venus? But should that mean that your troubles being in a relationship with him will be any less? Not necessarily! Because there’s another thing we need to remember about Venus: she had her ups and downs too. Olympus, in the Roman mythology, often witnessed her mood swings that led to some of the most dangerous epics. But the men on Mount Olympus still chased her, for there was no one who could compare to Venus. Same is the case with your Libra man, and that is all the reason to know how to love a Libra man. Romance comes easily to the Libra man. One would think that he invented love, given how good he is at it. But what happens when the invention gets ahead of the inventor? A Libra man’s love is the love based on logic. Everything about him is a debate between logic and whatever or whoever the opposition is.

Even when you feel like there’s something you cannot put up with, he will surely mold your opinion to his benefit by pure logic. But this very debate that goes on in his mind makes him a bad decision maker. This is when the problem sets in as whenever he is unsure about something or someone, he will not act. This can be highly frustrating.

He can charm you with just his smile. And also, make you hate him during his bad period. While he would never intentionally hurt anyone’s feeling. In the argumentative mood, he won’t even be aware of the damage that he has done. His interest in women will never be lost.

Even when in love, he can’t help himself but imagine dancing with every woman in the room. This might lead to infidelity, but it is to avoid these things that we have the support of Astrology. You love your Libra man right, and you can put all romance novels to shame.

How Does a Libra Man Act when He’s in Love? 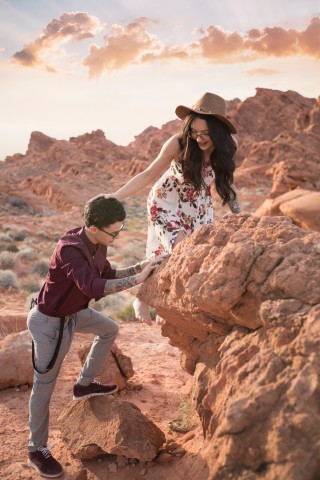 Before going further let’s look at the signs a Libra man is falling in love with you or is at least serious about you. Like I said, his indecisiveness gets in the way of most things. This makes it hard to be sure whether he likes you or not. But if he’s confident around you, that is one sign you can’t ignore. For someone who has difficulty making the simplest of decisions, this is a big step. He’ll know where to go or what to do, just because he is sure of his love for you.

Do you know more about him than most people? This is because he is letting his guard down around you. That is another sign that the Libra man is falling for you, since, he doesn’t trust easily. The fact that he feels comfortable enough to share his secrets with you says a lot about how he feels. He will show commitment and expect it from you too. You wouldn’t see him flirting around anymore. He will discuss plans for the future. A future where you fit too. It is only when he is sure of his feelings for you that changes like these will happen.

More importantly, he’ll be open about his feelings. No more hiding for the Libra man when he is in love. He will make known his affection for you. Even if he isn’t upfront about it, you will know what he is trying to say.

What Does a Libra Man Look for in a Woman?

He might be in love with you, but to keep him, you need to know what it is that he is looking for. After all, knowing his expectation, likes and dislikes will help you go a long way. Intelligence for one is the key. Not only in terms of the information you have on the world, but also on living right. Since he puts so much emphasis on logic in his life, he doesn’t expect his partner to be dumb.

The Libra man expects his partner to be organized. Whether it is organizing the home or your life. Being organized represents certainty. He certainly wants you to have what he lacks. He needs you to boost his ego. So, a partner who can shower him with compliments will go a long way with the Libra man. Take note of and appreciate all his tastes. They are testaments of some very hard decisions made by him.

Even though he is bad at decision making, you need to have a mind of your own. The Libra man won’t mind taking your help deciding. If he doesn’t follow your advice, the debate will help speed up the process for him. He feels very strongly about being fair. Anything that is remotely unjust sets him off. Don’t engage in anything that he thinks is unfair. This includes things like gossip or low blows dealt with others no matter the circumstance.

While it helps to have a mind of your own, don’t confront him often. He will grow surly in a household that is filled with negativity. Don’t force him to act fast. He needs his time to make a balanced decision. And would much rather run away from the problem than taking a hasty decision.

His indecisiveness will make it easy for him to lose interest. There’s also the fickleness in his Venus-ruled sign that makes this all the faster to happen. So, you should always be on the lookout for signs a Libra man doesn’t like you or doesn’t care anymore. If you feel like he’s avoiding you, then that can be a bad sign. Constant communication with one person can bore the Libra. If this conversation doesn’t interest him, then that is even more grave. Try giving him some space to make things better.

A Libra man who has lost interest will also not make the effort to communicate his feelings. If he has started to remind you of the way he was when you first met, that can be a tell-all sign. Only in love will the Libra man make the effort of sharing his feelings. When that feeling is gone, he closes the doors to his emotions. The libra men know how to hold a grudge. If you have done him wrong, he wouldn’t let it go easily. We told you how much he believes in justice. How did you think he would respond to your unfairness towards him?

He will stop making the effort to please you. This happens for he no longer feels that he owes you anything. So, he would much rather not waste time thinking about making you feel good. He will start making excuses to avoid spending time with you. When this happens, know that the final blow to your relationship has been dealt with. There is a very small-time gap between this and him deciding that he needs to move on.

Compatibility with the Libra Man Love works in mysterious ways. You can never be certain about who can fall in love with whom. But a closer inspection of the zodiac does help in getting some idea. For example, there are certain zodiac signs that are highly compatible with the Libra man, while the other might not be. A Libran woman can certainly attract the eye of a Libra man. They both happen to be on the same wavelength about most things and get along just fine.

A Gemini and an Aquarius woman will be equally compatible with the Libra man. Both these zodiac signs love excitement and conversations. The shared interests are enough to see them through.

Other zodiac signs that can hope for a happy relationship with the Libra man are Sagittarius, Leo, and Aries. While the Aries dominance helps to get things done faster, they will have to work out an arrangement where the dominance doesn’t get out of hand.

Incompatibility with the Libra Man

Love requires work. Sometimes, more work than other combinations. No one can say which two people might make it work. But zodiac does help us identify which pairings with the Libra man will have to work extra hard to make it work.

Women born under the zodiac sign of Cancer will find it difficult to make it work with a Libra man. This is mainly because while the Cancerian is looking for a connection of the heart, the Libra man is looking for a connection of the mind. The priorities in their relationship shift accordingly and this leads to discontent. The key to making this relationship work is understanding one another.

Just because the Libra seeks a connection of the mind doesn’t mean they don’t care for romance. In fact, as we have already established, they are the creators of romance. Capricorn in this regard is a tough nut to crack. Many times, the Capricorn female will put her ambitions above her relationship. That is not something that the Libra man can put up with for long. Both the zodiacs need to understand one another and shift priorities to make their partner more comfortable.

Now that you know the secrets to the Libra man’s heart, you know you can count on making this work for the long run. The key to every relationship lies in understanding the other person. so long as you extend that understanding to Libra, he will return the favor. Make sure to keep the mysteries of the Libra man in mind and practice!