She is an awesome girl. She, being so young, is a threat to Taliban and other extremists with her way of speaking the truth, of standing up and fighting for her rights.

The Youngest Nobel Prize winner, Malala Yousafzai is a well-known Pakistani activist who was brave enough to face gun shots in her attempt to voice female education. Malala Yousafzai was born in a Sunni Muslim Family on 12 July 1997, in Swat Valley of North-Western Pakistan. Swat Valley is a very beautiful tourist place which was referred to as ‘Switzerland of East’ by Queen Elizabeth II during her visit to the place. Malala lives in Mingora, Khyber Pakhtunkhwa province of North-Western Pakistan with her parents and two younger brothers. Her father, Ziauddin Yousafzai is an education activist and a poet himself. He runs a chain of school (Khushal Public school) and Malala too was mostly educated by her father who made her fluent in Pashto, English and Urdu. Malala’s mother’s name is Tor Pekai. 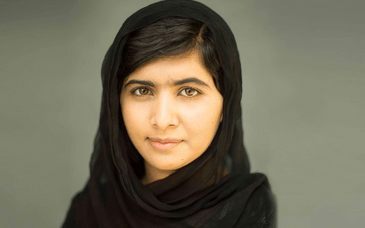 Khyber Pakhtunkhwa province of North-Western Pakistan is the place where female education, television and music was banned by the local Taliban led by Maulana Fazlullah. Girls were stopped from going to markets for shopping. In the year 2008, BBC Urdu decided to cover the growing influence of Taliban on Swat Valley for which they wanted a school girl to write her experience in form of blogs. The BBC correspondent Abdul Hai Kakar got in touch with Malala’s father for this purpose. At first a girl from his school ‘Aisha’ agreed to do this but her parents were afraid of the Taliban. This was the time when policemen were being beheaded and hung in Town squares. No wonder why Aisha’s parents stopped her from writing about her experiences in school. This is when Ziauddin Yousafzai, chose his daughter Malala for the cause who was just eleven at that time.

Editor of BBC was concerned about the safety of Malala and thus he decided to publish her blogs under a Pseudonym. The blogs of Malala was published under the name ‘Gul Makai’. Her first blog was published on 3rd January 2009. Malala would first write down the notes with hand which was then sent to the reporter who scanned and e-mailed the notes. Blogs of Malala describes her experiences during the ‘First Battle of Swat’ which led to the closure of her school. The Taliban had ordered that no girl would attend school after 15th January 2009 in Mingora. Malala got to read the excerpts of her blog in the newspaper the next morning after the ban took effect. By then, more than a hundred of schools were blown by Taliban. After the ban, the group continued to blow schools.

Malala as a refugee

The schools remained closed till 21st February when local Taliban leader announced on FM radio that he was lifting the ban till 17th March for the exams to take place but the girls must go to school only in Burqa. Malala’s last BBC blog was published on 12th March 2009. After the BBC diary ended, Malala was filmed in a documentary by New York Times. In May 2009, during the ‘Second Battle of Swat’, Pakistani army started trying to take control over the region. They evacuated Malala’s native place Mingora and she was sent to live with her relatives into the countryside while her father moved to Peshawar to protest. Her father received a life threat by Taliban commander over the radio after he criticized militants at a press conference.

Inspired by the activism of her father, Malala decided she would become a politician though she aspired to become a doctor previously. In July, the prime minister of Pakistan announced that the refugees could return to Swat Valley as the place was now safe and free form Taliban militants. Malala returned to Mingora with her family on 24th July 2009. After her appearance in documentary, Malala gave an interview on AVT Khyber, the national Pashto-language station. She was also interviewed on Dialy Aaj in Urdu and by Canada’s Toronto Star. 19th August 2009 saw her appearance on Capital Talk for the second time.

Malala was nominated for the International Children’s Peace Prize in October 2011 and she was awarded the National Youth Peace Prize on 19th December 2011 by the prime minister of Pakistan, Yousaf Raza Gillani. By December, it was revealed that she was the girl writing for BBC under the pseudonym ‘Gul Makai’. She received death threats in newspapers and on Facebook. Taliban leaders decided to kill her in a meeting held in the summer of 2012. She was shot by a gunman when she was returning home after taking an exam on 9th October 2012. The gunman entered the bus she was travelling in and asked the passengers who Malala was. He threatened to kill them all, if they didn’t speak. After he identified Malala, he shot her.  A bullet entered her head travelling through her neck to the shoulder. Two more girls were injured in the attack.

Malala was airlifted to Peshawar for treatment. She was admitted into the Military Hospital where she was declared critical. Malala slipped into coma as a result of the attack. After the initial treatment, she was moved to United Kingdom. Her treatment continued in Queen Elizabeth Hospital. There she came out of coma and was responding well to treatment by 17th October 2012. She was given discharge from the hospital on 3rd January 2013 and was shifted to a temporary home in West Midlands for rehabilitation. On 2nd February 2014, she went through final surgery for skull reconstruction and hearing restoration. Malala’s assassination attempt was covered by worldwide media. It gained her sympathy and also caused a burst of anger towards the assassins. Several protests took place in Pakistan the next day of her assassination attempt and more than two million people signed a petition for Right to Education Campaign. This led to of the first Right to Education Bill in Pakistan. 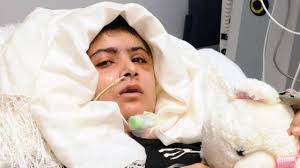 A ten million rupee reward was offered for any information about her attackers that could lead to their arrest. Her attacker was said to be identified the very next day of attack as Atta Ullah Khan. He was a 23 year old student. Six other men were also arrested but they were later released as no evidence was found against them. Later, her attacker and the other members of the group were arrested in a joint operation of ISI, police and military. In July 2013, Malala met Queen Elizabeth in Buckingham Palace and spoke at Harvard University. She met Barack Obama, the U.S President in October. She also spoke in London at the Girl Summit where she advocated rights for girls. On her 16th birthday, Malala spoke at the UN advocating women education worldwide. This event is dubbed as ‘Malala Day’. Stephen Harper, the prime minister of Canada was the first person to sign a petition that requested Nobel Peace Prize to Malala. She was announced to be the co-recipient of Nobel Peace Prize 2014 on 10th October. She shares it with Kailash Satyarthi from India who too is a children’s right activist. Malala has received many national and international awards till now in different categories.

Malala, A Symbol Of Peace

Malala has also co-written a book ‘I am Malala’ with Christina Lamb a British Journalist. The book was published in October 2013 in the U.S and U.K. Her book is now being translated in different languages. Her words after she recovered from the attack are symbol of bravery, humanity, equality, peace and individual growth.

“The terrorists thought they would change my aims and stop my ambitions, but nothing changed in my life except this: weakness, fear and hopelessness died. Strength, power and courage was born … I am not against anyone, neither am I here to speak in terms of personal revenge against the Taliban or any other terrorist group. I’m here to speak up for the right of education for every child. I want education for the sons and daughters of the Taliban and all terrorists and extremists”