You would think that the Aries woman’s perfect man would let her do as she pleases. After all, who else could bear her aggressive personality. You would be right and she would believe this too. Until she meets the man who matches this description perfectly: the Pisces man. His gentleness and non-confrontational manner will annoy her even more. But there still is a connection between them that goes deeper than these differences. Those roots are what can turn them into the perfect couple. Wanna dive deep into the ocean with the fish? 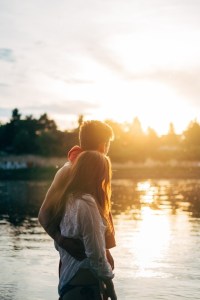 Don’t rule out the possibility of a successful reunion between them yet. Association between them is beneficial to both. The Aries female has a lot to learn from the sun sign immediately behind them. Consequently, the Pisces male has a lot to learn from those ahead of them. They are influenced by the 2-12 Sun Sign Pattern vibrations. This has different implications for both of them. Aries woman will always represent money to him, in a positive or negative manner. The Pisces man represents mystery to her. He keeps secrets that he won’t tell her. This annoys her. Their personalities vary greatly.

She’s aggressive while he’s accommodating. When she wants something, she goes out of her way to get it. He just lets fate make the decision for him. Often, they clash because of these differences. Some times they are brought together by it. But she shouldn’t let this fool her. She might feel like she can push him around. But he’s a water sign and water always drown the fire. None of her fiery tactics can stand against his wisdom. He doesn’t respond because he knows better than to give in to impulse. But when the ball is in his court, he will definitely score.

He’s blessed with the infinite wisdom of the Neptune and so is tolerant of her child-like Aries habits. No other man will be as accommodating of her tantrums as him.

What does the Pisces Man Like About the Aries Woman? So, what brings these two obviously different people together? Her fun and fresh personality attract him. He is a lively man at heart. Don’t think he’s a pushover who enjoy nothing but the comfort of his home. He appreciates a woman that can shake a room and she does just that. Now, an Aries woman true to her zodiac will find nothing interesting in him. But not all of us have Aries in all their signs. Others see a wise man who has so much to share with her. In their first conversation itself, she will see how he knows more than her. She might not accept it in the first go.

But there will be a time when she will come to trust him with all her secrets. If not a romantic relationship, a friendship will definitely develop between them. One of my closest friends and confidante is a Pisces. They provide comfort that no other zodiac sign can to the Aries. We sure know how to value that. All her life she has been wary of those around her. here is a man who she can depend on for all her needs. He doesn’t judge her either, for the Pisces man understands her emotions. A mature Aries woman will never let a Pisces man slip through her fingers. But how many mature Aries women are there?

You are probably thinking that they are not. Well, prepare to be surprised. There is an eternal and beautiful mutual attraction of explosive activity and cool stillness. Their physical relationship is the one place where they are bound to be perfect. Unlike other water signs, he is just as imaginative and creative as she wants him to be. However, I will not deny that this can be the attraction between a potential conqueror for a potential victim. Severe planetary afflictions will turn a beautiful union into a hunting expedition. But in that case, they probably won’t even reach this stage.

This couple can enjoy exceptionally happy physical chemistry that could outlast any disturbances. In fact, the bliss of their physical union can help them build a strong relationship. Sex will connect them on a much deeper level. That will build an understanding that can outlast all storms. What helps is that their romantic goals are identical. Even though philosophical approaches are different. So, even when they differ on what the best way to achieve Nirvana through sex is, they will agree that what they have comes close.

Both are sentimental and imaginative and seek a sexual experience of great intensity. What else can you ask for when the end goal is the same. The means don’t generally matter.

Are Aries and Pisces a Good Match? You can count on his wisdom and her determination to know that they will make it through. if they set their mind to it. For that, he needs to be in love with her though. His elusiveness annoys her. But it isn’t a mess she wants to be a part of. It’s not easy carrying the weight of knowing everyone’s sorrow and troubles. But the day he starts sharing all his secrets with her is the day he has fallen in love. An inherent danger is that sexes can get mixed between them. She is more masculine than most women. And he is more feminine than most men. These afflictions annoy both of them thoroughly.

The manner in which he deals with their arguments irritates her. She hates to be forced to shadow-box their way out of a disagreement. He does this to avoid confrontation. There’s nothing that a Pisces man hates more than confrontation. Neither understands the other person’s confrontation dealing ability. The Pisces man doesn’t get why she has to always fight every battle. The Aries woman can’t fathom how someone would always lay low.

There is very little chance for them to get married. This is because the Pisces man deems marriage as an unnecessary institution. To him, it’s just two people who involve the law in their law. So, he would avoid it as much as he can. This relationship works better when it’s between a Pisces female and Aries male. She needs someone who can put his foot down when she gets out of control. The Aries woman can ruin many lives by acting on her impulses. Even when he tries to control her, he isn’t convincing enough for her to listen. And they will eventually come to a point where they will have to pay the price.

A Pisces man with Moon or Ascendant in a Fire sign may possess the right blend of fiery command and gentleness of manner. This man will be her knight in shining armour. The perfect prince that she has been dreaming about her whole life. It is possible for them to meet, mate and murmur sentiments into each other’s ears happily. It is possible, but the chances of that happening as very rare. Only a perfect association of the Sun-Moon-Ascendant of their natal charts can assure that. But if they do decide to settle down, theirs will be a happy marriage.

He is the most likely to believe in the kind of enchantment every Aries girl lives within and demands romantically. He will not let time dull their marriage. It will always remain as exciting and exhilarating as it was in the beginning. She’ll adore him. Trust in his dreams and respond with flutters with excitement to his sensitivity and gentleness. When you think about it, that is more than what he could ask for in his life partner. Someone who understands the realms of his imagination. So, don’t give up on this couple yet. Give fate some time to work its magic.