They are 22 very brave women who were victim of rape to publicly show their faces while posing for the cover of the magazine Laisha. They were 56 to entrust the magazine with their painful history. 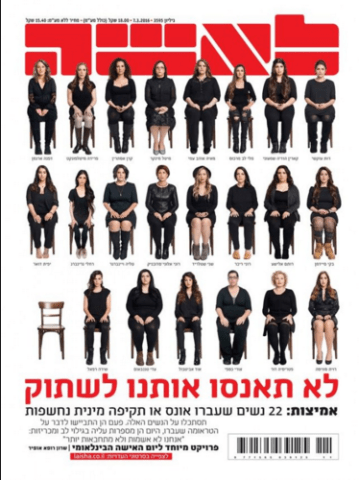 Dressed in black, solemn, they pose, sitting on a chair, hands on their thighs, facing the camera. They are 22, 23 if you count the empty seat representing all those who dare not give up their hell, and one glance, they challenge the reader and the whole society to make them shut again, while they held their ordeal secret for too many years.

These women are victims of rape and this photo is the cover of shock Laisha Israeli magazine, unveiled Monday with the First Lady Nechama Rivlin.

The magazine wanted to give voice to these Israeli women, coming from every backgrounds and who kept silent suffering and trauma. In total, 56 of them are entrusted to the journalist Sharon Rofeh Ofir and their stories are all totally revolting. There is for example Roni Aloni-Sadovnik, 48, sexually abused by a family member from her three years until the age of 12. She is now a lawyer and defends other victims.

“Most women of my generation have been victims of abuse or sexual harassment, says the Jerusalem Post Nofah Miriam Mozes, director of the magazine, to emphasize the importance of such a project and the courage of women out of the shadows. It was the norm at the time. ” No one filed a complaint because the attacks were tolerated by society and that women do not fight for their rights. But that time is over and now the victims are no longer afraid to release their word.
“Nobody has the right to touch you without your consent,” recalled the president’s wife, not only to women victims present at the meeting, but also to all those who have suffered sexual abuse.

To launch this cover, they were inspired by the New York Times Magazine July 2015 issue on which were 35 women appeared saying: “I was raped by Bill Cosby.” “The New York Times greeted us for this coverage and said he was flattered to have inspired the Israeli publication, hoping that other media in the world will follow suit“, aprreciated Sharon Rofeh Ofir. Customers were also many applaud this initiative and the courage of these women who dared to break the silence that others can do it too.