90% of human interaction happens online. For the couples who have their jobs to look after as well, the chances of being in touch with a physical presence are even harder. Long distance relationship couples understand. But this online culture has made things a little more complicated. There is a limit to how much one can text about. After a while, we run out of topics or most of the times don’t even have things left to talk about. So, what do you do if this lack of offline interaction is increasing the distance between you and your loved one? Well, you can always turn to playing games. No. I’m not talking about playing Assassin’s Creed or Black Ops. Just some fun texting games to lighten the mood, stay connect, or even get things steamed up. If you know what I mean *wink*. Here are a few texting games that you can play with your boyfriend. 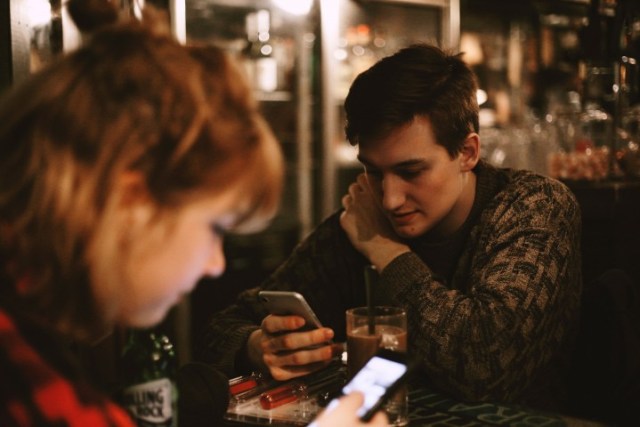 If you don’t know about this game already, you really have a lot of catching up to do. Would You Rather? is probably one of the best games out there. Whether you are at a party, a gathering, or texting on WhatsApp, this game is made for all crowds and all occasions. The title is self-explanatory, for the most part. So, basically what you do is give two equally tough alternatives and the other person or persons have to choose the one they feel more comfortable with. For example: Would you rather, always have to say everything on your mind, or never be able to speak again? It sure would be better to never be able to speak again because boy you don’t want to know what’s on my mind. But well, if your boyfriend chooses the former, you know he has nothing to hide from you.

Risk this one only if you are super secure about your relationship. This is not a texting game that sensitive partners should play for many feelings might get hurt. If you still choose to read on, the rules of the game are simple. You give your game partner the names of three people. These can be celebrities or people you know (if you want to take things up a notch and have the heart to sit through it). The person to whom the choices have been given has to choose which among the three he/she would Kill, Marry and Hook Up with. You have to make it really tough if you want to make it difficult to answer. For example Channing Tatum, Bradley Cooper, and Leonardo DiCaprio, which one of these would YOU kill, who will you marry, and who will be the boy toy? Give your answers in the comments section below.

New is silver, but old is gold ladies. So, you probably are sick of this game or haven’t played it in quite some time. But it is sure to have a new sensation to it when you play it with your boyfriend. If you haven’t seen him for quite some time, well it’s always a good way to get some information. But most likely it won’t be the truth, so why not make it fun and go for a dare they have to complete and send you pictures or videos of. To be honest, Truth or Dare can never leave its essence. It’s always fun to put people in a fix and it does get a party started. So, don’t just scroll down to the remaining options, try this one some time. It sure will be fun. This is a fun game for couples who love music. This texting game is pretty simple. All you have to do is text the lyrics of a song to your partner and they have to guess which song it is from. If the two of you like the same artists or bands, then this will become even better. But why limit it to song lyrics when there is a whole world of movies out there. So, pick up some classic lines from Hollywood or Bollywood or whatever film industry you follow and quiz each other. The loser will have to call the winner and sing the entire song to them or enact the scene the dialogue came from, make a video and send it to the other person. This one can be played anywhere with anyone. It’s a little like charades, but with more clues.

This one is from the archives, so I don’t blame you if you haven’t heard of this game before. 20 Questions became a big hit in late 1940, and is probably also the inspiration behind the Guess Who? board games, now owned by Hasbro. The rules are pretty simple. You have to choose a subject, that can be an object or a person, and then the other person has to guess what it is that you have chosen by asking 20 questions. These questions need to be answered in ‘Yes’ or ‘No’. For example: Let’s say you choose your laptop as the object. Your boyfriend asks, “Is it a living thing?”. It obviously isn’t so you respond negatively. This goes on for 19 questions or less, till they can or cannot figure out the object or person.

This is one of my favorites. Not only is this game creative, it also becomes really amusing if played with the right person. You begin with a sentence, any random sentence and the other person has to continue building the story with a follow-up sentence. For example, You begin with, “There was once a princess named Casandra.” And then your boyfriend follow up by saying, “Who was looking for a Prince in Bandra”. I’m not very good with humor so, forgive the lack of it in the example. Anyway, you get the idea, right? I hope you guys turn out to be better at this than I am.

This is a tough game to play too. As the name implies, Abbreviations is a game where you have to guess what the abbreviation expands to. This doesn’t have to be a general knowledge quiz, it needs to be fun and tricky at the same time. So, make up your own abbreviations and keep them guessing. You can even go for the tricky ones that the pop culture has invented for you already. For example IPBJ. To the dirty mind, it can mean a number of things, but I wanted to say ‘I played Black Jack’. So, turn him on or turn him off, the choice is yours, my friend, I can only guide you in the right direction.

Never Have I Ever This is another popular alternative these days. If you are a fan of The Ellen Showthen you probably know the rules already. If you don’t, fear not, for I am a big fan of Ellen DeGeneres. Here’s how it goes: you give a situation that you have never been in or something that you haven’t done. The other person has to tell whether they have or haven’t. For example: Never have I ever gotten so drunk that I couldn’t recall anything. Your partner will then have to tell you if they haven’t either or if they have. If they have, then you get to choose a punishment for them.