You would think that he can never have a crush on anyone. That is the tragedy of being an Aries. People always assume that we are so self-absorbed that we are incapable of love for someone else. Anyone who has ever loved an Aries knows how wrong this assumption is. But yes, I agree, it is tough to tell whether an Aries likes you or not. Because they will either just go ahead and say it. Or would never let it show especially if it seems like you don’t feel the same way. We just don’t let our emotions show. Usually, this is out of fear that if our feelings are not reciprocated, we’ll be left broken-hearted. This is true for both Aries men and Aries women. So, how do you tell if your Aries crush likes you? Here are signs that tell you an Aries man has feelings for you. 1. He Spends as Much Time with You as Possible

The Aries guy doesn’t believe in taking time with things. The Aries zodiac sign is the most impatient sign of all. So, he would like to speed up the entire getting to know you process as fast as he can. If you can’t meet him, there will be a chain of messages awaiting you on WhatsApp. He needs to make his decisions as fast as he can. But he can’t do that unless he knows you are the right person for him. That’s where spending all of this time comes from. The shy “sheep” type Aries aren’t usually vocal about their feelings. But even they like to be around their crush as much as they can.

2. He’ll Pay Attention to Everything About You

Only an Aries on a mission to observe everyone around them will pay serious attention to those around them. As you can guess, not all Aries are on that mission. But when they have a reason to do so, you will not find a better observer. When an Aries man is interested in you, he will pay attention to even the smallest detail. He would know your favourite colour. Your favourite food. The place you most like to hang out at. And one of these days he would casually point something out about you to your great surprise. An Aries friend of mine once pointed out about his crush that she adjusts her glasses every time she makes a serious point.

3. You’ll Be a Celebrity Among His Friends

When the Aries man is attracted to someone (or something) they let the whole world know. So, chances are, if the Aries male has a crush on you, his friends know everything about you already. And even if he hasn’t told them about his crush, he would’ve talked about you highly. He will want you to meet his friends too. If you are not in a common friend circle, he will try to get you to know his friends. He doesn’t just do this for anyone. It takes a woman he is into to get to be a part of his inner circle.

4. He’ll Make an Effort to Get Your Friends to Like Him Too! 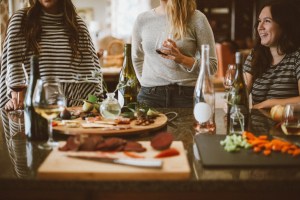 As important as his friends are to him, yours are too. He knows that a way to a woman’s heart is by convincing those around her. So, he will show interest in getting to know them. When you do introduce him to you, he will be at his most charming self. And if you know anything about an Aries, you know that when they try to charm, they do a damn good job at it. I won’t be surprised if some of your girlfriends have a crush on him before the end of the day.

5. He’ll Touch Your Face A Lot

Aries just have a habit of expressing affection by touching the face. As I’m writing this, I am thinking of all the times I’ve pulled a kid’s cheek, or pat someone on the face when I’m expressing affection. So, yes, you’ll get that a lot from him. He might not pull your cheeks or pat your face, but his hands will find a way to your face. When an Aries man wants you, he’s already thinking 10 steps ahead in the relationship. And the physical expression of love holds a great significance to them. So, he will touch or hold your hands whenever he gets the chance. There’s just something romantic and sensual about touch to the Aries.

6. He’ll Get All Philosophical with You

You probably don’t realise this but Aries has a very distinct way of looking at life. They don’t go around throwing the wisdom around. But ask an Aries the meaning of life and they’ll give you an answer you hadn’t thought of yourself. And it is important for them to know what your thoughts on things are. They’ll ask important questions about your life and plans for the future. What do you think about the family? About social work? Why is there so much injustice in the world? Is there really a God looking over us? He cannot date someone who doesn’t have the same interest in life and its many questions as he does.

7. He Will Try Very Hard to Convince You When You are at Odds with His Ideologies

Aries have a zeal for what they believe in. And when they are convinced of something, they see no other way about it. Now they are always at odds with someone because of a difference in opinion. But it is very important for the Aries male to know that the person he is in love with shares his ideas. So, if he does find out about a difference in opinion, he wouldn’t let go till he converts you. Now you can either bow down and pretend to accept what he’s saying is right. Or try to convince him that your having a different opinion doesn’t affect things. Either way, you have to settle this because he won’t let go of it.

8. He Shows an Interest in All Your Hobbies 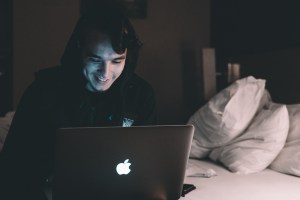 It is a common tactic among men to pretend to like what their crush does. But with the Aries male, it’s different. The best way of knowing that he’s interested in you is seeing how he responds to your interests. He wants to look at things the way you do. So, he will make a genuine effort to like the same things as you do. But at the same time, he will try to make you like the things he does. The more innocent (or arrogant, people perceive them) among the Aries men would focus more on what he likes. But that’s just because they are too childish to realise that love is a two-way street.

One of the best things about the fire sign zodiacs is that they don’t hold back. Especially in love. They are just so excited to get to the next phase that they don’t worry about being shy. So, if Aries man is secretly in love with you, 90% of the time, they just say it. If you give a clear indication of your disinterest in him, then he’ll back off. But if he feels like there is some chance for this to happen, he will not wait for a long time. the ball’s in your court then. How have you decided to move?