Some days ago WomenNow.in – as many other media outlets in India but also the rest of the world – published an article about the Rohtak sisters. The case seemed clear, one out of so so many situations where Indian girls and women are treated in a way that is shameful for our society. However, since then a lot of evidence came to play showing that this special case was not as obvious as we thought at first. Several witnesses said that the girls were not attacked or harassed but rather the other way around. We will leave both articles published and we ask our readers to make up your mind on this.

As did Ria Sharma, founder of Make-Love-Not-Scars, who commented the case asking the following question:

Using your gender and the threat of sexual harassment charges to your advantage? 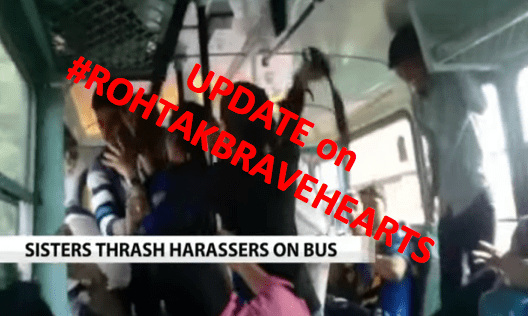 I’m all for feminism but do we really want the Rohtak sisters to be the face of it?

From the looks of it, the “Rohtak Bravehearts” are giving India a bad name and confusing the society.

Its one thing to stand up for your rights but using your gender to get your way, now doesn’t that sound familiar? Yes it does because that’s normally what we see the men do. At the risk of sounding sexist, let me make this clearer.

Using your gender to get your way or manipulate a situation is wrong…no matter what gender is adopting the practice.

When the first video of the sisters came out all of India was in awe and it was no surprise that the video went viral but now as new evidence emerges one can’t help but feel that the sisters are doing more harm than good.

One needs to keep in mind, that once the finger is raised on the women, it is always harder to get rid of the image that has been cast compared to when a man commits a crime.

We are used to men committing crimes against women (not that it makes it alright) but with the Rohtak sisters taking out their anger in ways that’s affecting even some innocent men, they may indeed spoil the battle we are fighting against the men.

I can’t help but feel bad for the innocent men that have been captured crying in the most recent expose about the sisters and its not about men or women, its about an innocent person’s reputation…be it a man OR a woman…

Such attention seeking antics may just be the reason that people won’t actually come to their rescue when they need it most. Referencing the boy who cried wolf once too often, when they actually have a case to file and serious damage has actually been done they might not have any allies. It is hard enough when the dress code of women, the fact that they use cell phones, eat chow-mien…is being used as an excuse for rape.

Such cases only put our credibility at stake. Beating up a boy in broad daylight for no apparent cause, threatening him with the apparent “chacha” that works in law enforcement, now…doesn’t that sound familiar?

The irony of the situation could actually pass off as humorous if it wasn’t such a sad state of affairs…but the Rohtak sisters are doing nothing but portraying the traits that we try to get rid off in the men. We can’t expect men to change if we women start to adopt their ways, we need men in order to spark a feminist movement not be against them. It’s high time we realised that an eye for an eye will soon make the whole world blind.

Nine eye witnesses have confessed to being harassed by the Rohtak sisters. Are we turning a blind eye because the finger is being pointed at the weaker gender?